As more and more drones take to the skies, a small but dedicated industry is emerging with the sole aim of shooting them down. There are many ways that rogue drones can be taken care of. But is there a perfect counter-UAS technology?

Why Does the Counter-UAS Scene Exist?

There has been plenty of fear (and no shortage of hype and exaggeration) surrounding drones in recent years. We shouldn’t forget that not that long ago modern quadcopters would have essentially been a military-grade technology. Some argue that they should still be classed as such.

For a while, security concerns were limited to pilots flying where they shouldn’t and breaching no-fly zones. There continue to be plenty of ‘near-misses’ reported between planes and drones, with drone pilots flying too close to airports and planes being diverted. We can argue about how dangerous a drone/plane collision would be and whether there’s any proof of these near misses. But the public perception is that they are happening and that they are potentially fatal. The wider opinion of drone technology is shifting for the worse as a result.

But it’s become clear that the risks go further than pilots flying where they shouldn’t. Everyday drones that can be bought in the mall are being weaponized and utilized in war zones from Iraq to Syria and the Philippines. This is a worrying state of affairs and it’s not obvious who should be held responsible (and therefore who should act to stop it); manufacturers, whose drones manage to make it into countries like Iraq, irresponsible retailers further down the chain or the individuals concerned?

Fears that terrorists could seek to use weaponized consumer drones for attacks in America and Europe are justified: it’s easy to get hold of a drone, they are simple to fly and with a few modifications they can be deadly.

Beyond weaponization and near-misses, there are reports that drones are delivering contraband into prisons and concerns that they could be used for industrial espionage.

All of this has led to a number of companies developing technologies to halt rogue drones, whether they are flying too close to airports, assisting terrorists, aiding corporate espionage or making illegal prison deliveries. 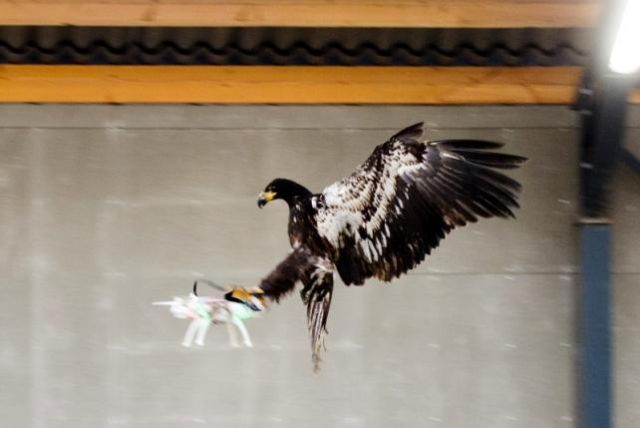 Broadly there are four main types of anti-drone technology. For the sake of this piece, we’ll refer to them as Jam, Spoof, Hack and Smash/Grab. If we’re looking to get more technical, these techniques involve radio interference, gps interference, software penetration and kinetic methods.

Let’s take a look at the contenders…

Eagles – Guard From Above

Understandably, this was big news when it first came out: Guard From Above is the Dutch company that’s become famous for being the first in the world to use birds of prey to intercept hostile drones.

With all the high-tech solutions around, why not start off with the most basic of all? This is a simple but effective counter drone measure that looks directly to the natural world for inspiration.

Guard From Above is currently working with police in Holland. They (or rather, their eagles) provide an “on-site solution to counter rogue drones”. They can be used to offer protection at public events or airports. The birds of prey have been trained to take down wayward drones.

From an animal rights perspective, there have been questions over how ethical this is. Couldn’t a drone’s props cause harm to the birds? They have this to say on the subject:

“Animal welfare is very important to us. We have over 25 years experience in working with birds of prey and we have specialists on our team with knowledge on drone technology.”

“In nature, birds of prey often overpower large and dangerous prey. Their talons have scales, which protect them, naturally, from their victims’ bites. The Dutch National Police has asked the Dutch Organization for Applied Scientific Research (TNO) to research the possible impact on the birds’ claws. The results are not yet known. Of course, we are continuously investigating any extra possible protective measures we can take in order to protect our birds.”

Sure, they make headlines, but do eagles represent an effective, reliable and humane counter-UAS system?

If you watched Breakthrough: Game of Drones on National Geographic back in May, you will have seen drone security company Department 13 competing in Mitre’s Counter-UAS Challenge.

Instead of knocking a rogue drone out of the sky, Department 13’s MESMER technology hacks into the connection between the pilot and the drone by manipulating the radio communication protocol. The team can then force the drone to land or initiate its return to home function.

This kind of solution comes in handy in the event of a drone being weaponized. Instead of just shooting it down and risking people below, it can be diverted to a safer location.

In the documentary, the technique was effective up until a point. It was completely ineffective against Lightbridge technology, which can be found in most of DJI’s drones since the Phantom 3 Advanced.

However, we got in touch with Department 13 to see how things have progressed since Mitre’s Counter-UAS competition went down. Although the security company is understandably keeping its cards close to its chest, they did confirm that MESMER can now work against one of DJI’s more recent drones that uses Lightbridge technology, and that handling Lightbridge drones is “in Department 13’s pipeline and there will be updates on this very soon.”

It’s hard to say how similar this technology is to that of Department 13’s Mesmer program, because Skysafe hasn’t released much information about how the company’s system works. Skysafe is focusing on protecting airports, prisons and other sensitive areas from rogue flyers.

There isn’t much detail out there, but speaking to The Verge, founder Grant Jordan claims Skysafe technology can identify an individual drone; distinguish authorized units from rogue ones; track the location of the rogue operator and take control. It can then be disabled or brought in safely.

“We don’t just detect, we do the intercept side,” says Jordan. “We fully take control of the drone from the operator, it sees us as the legitimate controller, and we can move it to a safe location and land it.” SkySafe can “spoof” the drone to hijack control.

It might seem less technical, but plenty of thought and technology has gone into the drone bazooka. This is the SkyWall 100 Drone Defence System, from UK security company OpenWorks Engineering.

In an effort to stop a dangerous drone in its tracks, the team can be deployed at an event to fire nets out of a bazooka and capture drones in midair. To be fair, it is more complicated than that. The gun can calculate the range and the power needed to reach the drone, and the nets can be attached to parachutes, minimizing the chance of collateral damage and protecting the captured drone so that it can be later assessed for forensic evidence.

There are plenty of companies out there promising to jam rogue drones and bring them down from a safe distance.

One is DroneDefender from Battelle, which jams the drone’s radio and GPS signals and causes drones to crash. Another is DroneRanger, which employed similar methods at Mitre’s Counter UAS Challenge with mixed success.

Although it could effectively block drones being manually controlled, DroneRanger seemed to have difficulties handling drones that were already on a predesignated flight path. Setting up waypoints and sending your drone on its way is something that most pilots can do with ease.

These two technologies appear to lack the control and flexibility required to handle all types of rogue drone situations. While they can successfully lock out an operator, they can’t actively seize control. This means that, for example, the drone could either land, return to home or remain hovering – in certain situations all of those could be dangerous.

However, these technologies can detect and disable drones from a long way away – so maybe it’s not so much of a risk?

As it stands there doesn’t appear to be a silver bullet to stop rogue drones. Each of the methods we’ve gone through has strengths and weaknesses, and each would fare well in certain situations. Perhaps what’s needed is a system that can harness several of these technologies at once and apply them when appropriate.

The unfortunate thing for the Counter-UAS industry is that the threat from rogue drone technology is going to keep evolving. And attacks will often be impossible to predict until the last few moments.

“While there are pros/cons associated with each, our conclusion is that solutions that employ multiple sensor modalities are likely to be more effective.

Due to the continuous evolution of commercial UAS products which are becoming less and less dependent upon the radio control link and GPS for operations, detection and defeat mechanisms focused on the aircraft, its propulsion, and onboard avionics are likely to be the most effective moving into the future.”

The First Drone, The First TV Camera and the First Catholic President Who Never Was

2019 Predictions for the Commercial Drone Industry with Josh Olds

SKYMAGIC Take To The Skies Over The Zurich Festival