Within the past few years, drones have become just another tool in the toolbox for movie creators, both big and small. The next time you finish watching your favorite feature film or TV show, pay attention to the credits at the end. More than likely, you will see the names of a drone pilot and gimbal operator in the list. Drones are becoming more popular on set, and they have practically secured their position as a supplement to conventional filming tools. The best usage of a drone falls somewhere between that of a Steadicam, a crane, and a helicopter, so they have become practically indispensable. 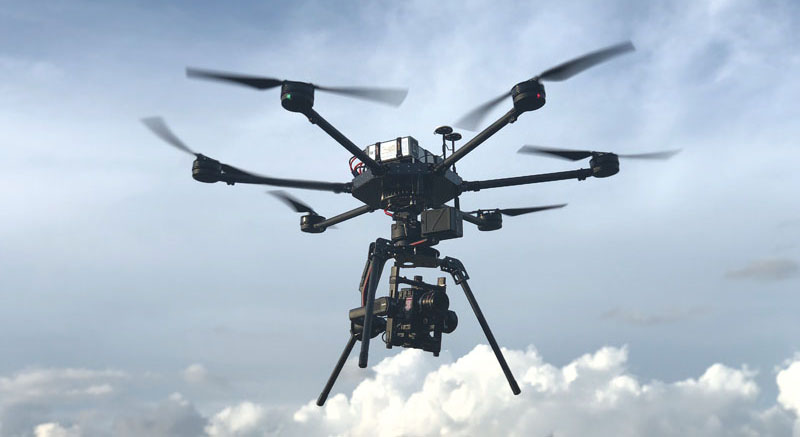 PREPARATION IS THE KEY
A typical shoot begins a few weeks or months prior with planning and the submission of necessary paperwork. The folks in production often require copies of our FAA Part 107 certification and proof of insurance. Most productions require $5 to $10 million insurance of liability coverage. After all the formalities are in place, we will then be told the shot or even given storyboards of the shot they are asking us to capture. These storyboards may be hand-drawn, computer-generated, or even done in Previs, which is practically the entire scene rendered in a computer animation. Other times, we simply walk on set blind and are told what the shot is about two minutes before takeoff.

On the day of the shoot, we arrive at the location at our scheduled call time. Most often, we shoot the whole day, so call time is usually at the crack of dawn, before sunrise. Both sunrise and sunset provide the most compelling light in which to shoot, so most days, we’re on set by 6:00 a.m. Depending on the production, there may even be a catered meal waiting for the crew—one of my favorite parts of working on big productions. After downing some coffee and breakfast, we are shown our first shooting location by a director, location manager, or production assistant. Once we know where we are shooting, we unpack all the necessary gear for the job. On most features, we film with our MFD 5000 drone carrying a Red Epic Dragon or Arri Alexa mini camera. All-inclusive, this aircraft package costs upward of $60,000 and weighs just under 55 pounds. It’s important to be meticulous when packing for shoots like this as there is so much support equipment required for a serious aircraft like the MFD 5000. On any given day, we carry generators, chargers, gas cans, extension cords, spare cables, soldering irons, spare propellers, spare landing gear…you name it, we’ve got it with us.

When we are at the first location, we begin unpacking and setting up camp for the day. First off is the setting up the landing zone. As the pilot, I want to have a landing zone that is nice and big, approximately four times the diameter of the aircraft. That way, if I were to have any sort of failure in the air and can still control the aircraft, I will have plenty of room to bring it down safely. I make sure the landing zone is free of anything that could potentially be sucked up by the propellers (or blown down into our eyes), including sticks, trash, and other debris. Next up, we have a chat with the director to learn the exact shot that he or she is looking to achieve. Once we know our shot, we find where both the pilot and gimbal operator need to position themselves to get the perfect shot. I always ensure that I am standing in the perfect position to see the aircraft at all times. Also, I’m always just a few steps away from Jordy (the gimbal operator) and the director so that I can hear the action. If I have to stand anywhere else that will give me a better angle for piloting, we use walkie-talkies to communicate during the shot.

Once we are all in place, it’s time to arm and prepare the drone for takeoff. As the pilot, it’s my responsibility to make sure that we fly safely while getting the required shots, and I need to know the shots we can and cannot do. If a director asks me to fly over a group of people, for example, the proper reply is, “Sorry. We cannot do that legally, but perhaps we can fly off to the side while the aircraft flies over a safe area next to them.” It’s really all about conveying in a nice way what you can and cannot do; after all, I’m just the hired gun, there to capture the shots that the director wants. 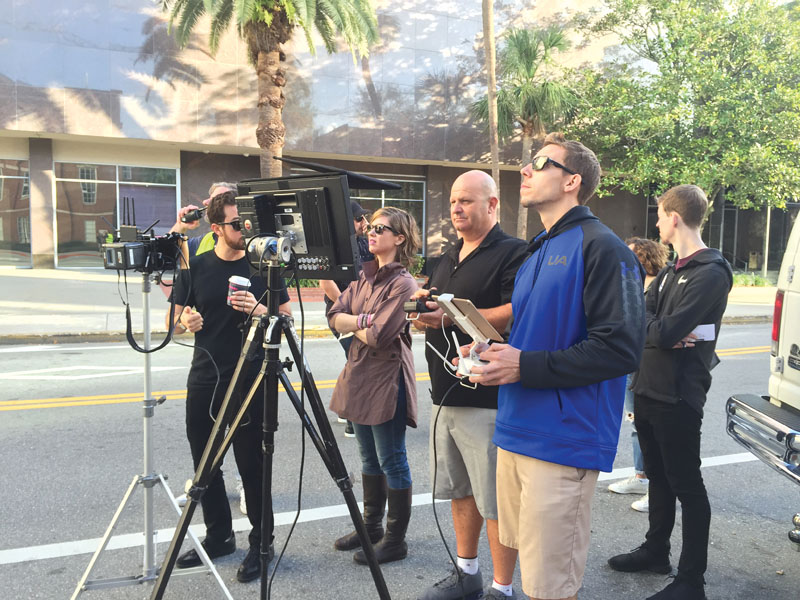 Shooting in downtown Orlando for the NBA. 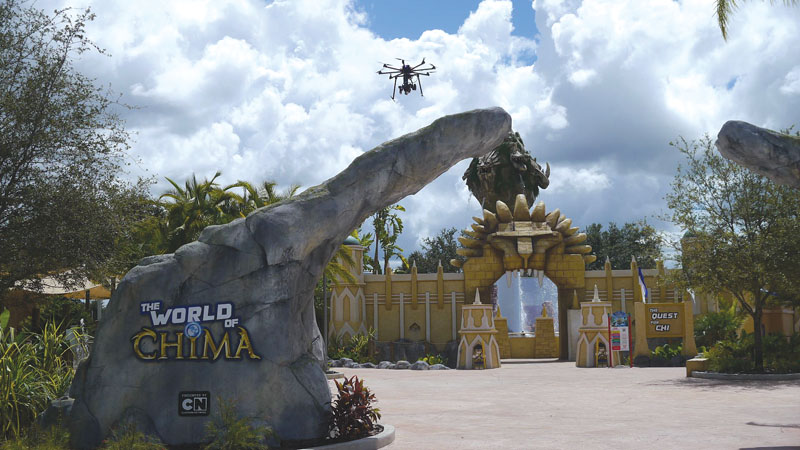 Filming for Legoland in Florida. 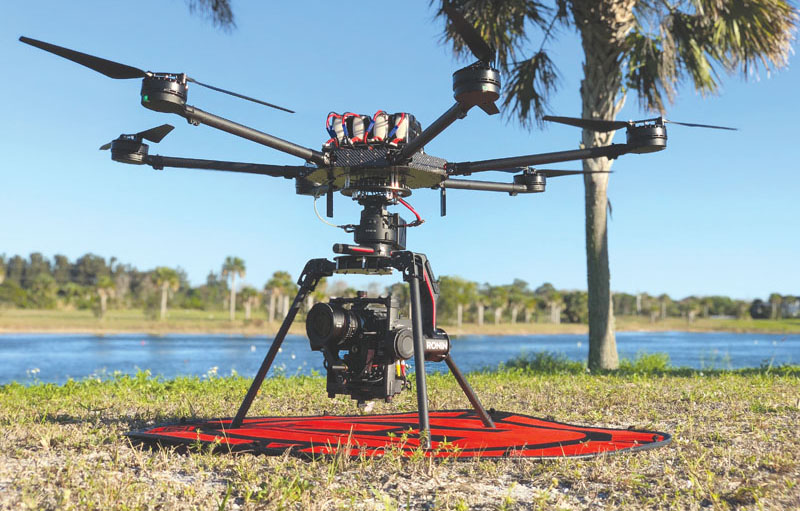 Our heavy-lifting drone on set in Florida, filming for a boat company.

GETTING THE SHOT
When the drone is in the air, capturing a shot is a delicate balance between the pilot, gimbal operator, and camera assistant. It’s the pilot’s job to get the aircraft in position and keep it close to the action. The gimbal operator is responsible for keeping the camera in on the action, showing exactly what the director wants to see. And it’s the camera assistant’s job to ensure that the shot is in focus, the exposure is correct, and the camera is recording. Watching a three-person team pull off complex choreographed shots like this is always fascinating. For our big aircraft carrying these big movie cameras, flight times are 10 to 12 minutes. We fly, get the shots, then return to the landing zone with about 30 percent worth of battery capacity in reserve, primarily for safety reasons. Once we are on the ground, the aircraft is disarmed and a frenzy often ensues. Between changing batteries, camera memory cards, and lenses, there always seems to be a flurry of activity between flights. We then reload and go up again to see if we can improve on the previous shot or go after a different shot altogether.

After capturing beautiful shots during the sunset and morning hours, we often relocate to take a completely different shot. Because videos are often not shot in chronological order, we may shoot the last scene in the movie in the morning, then move to filming a scene for the beginning of the movie later in the day. When the director is happy with our morning shots, we break for lunch and prepare for the afternoon. That is when the generators are running at their peak, charging up all our aircraft, cameras, and support batteries for the rest of the day. When we have finished lunch, we often head out to a third location or back to our original location to capture more shots until the end of the day.

During the course of a shooting day, we will have flown anywhere from one to 20 flights. It just depends on what the client wants to see and what we are able to capture for them. As a pilot, you can imagine how challenging it can be to hold your concentration with so much action going on around you all the time.

When the production staff is happy with the shots that we have captured for the day, we’ll hear those three words that are sweet music to the ears: “That’s a wrap!” After that, we take the memory cards to the digital-imaging technician, who is responsible for transferring all our footage onto the production’s secure hard drives. We then pack down our equipment, clean up our landing zone, and return home, ready to do it all over again the following day.

THE TAKEAWAY
After having done this for some time, I have come to the realization that drones are an extremely useful tool on movie sets as long as the production crew uses them appropriately and effectively. We are often asked to do shots that may be better suited to a crane or a camera car, but the versatility of a drone allows it to capture just about any shot imaginable. Directors are now even choosing drone shots as the final shot in a film, simply because they are able to pull off a beautiful, epic shot that no other moving camera tool can capture. There is no doubt that drones have cemented their place on movie sets. As drone operators, it is our job to operate our aircraft safely so that this technology can continue to flourish on the big screen. If you currently fly drones, keep practicing and keep shooting; you never know when you might be called upon to shoot for the big screen. 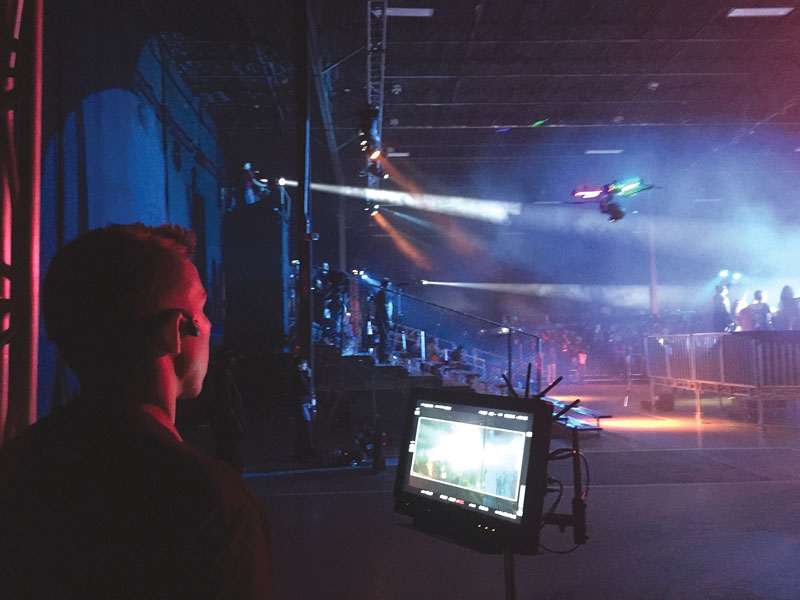 On set shooting for the movie All Eyez on Me.

2019 Predictions for the Commercial Drone Industry with Mariah Scott