Eyes Over the World: Aerial Photo Secrets from Around the Globe


Editor’s Note: Getting an aerial perspective on your subject is terrific, but it doesn’t guarantee that the resulting photograph will be interesting or engaging. Drone photographer Dirk Dallas knows what it takes to capture an image that stops viewers in their tracks, and his new coffee-table compilation of drone photos, “Eyes Over the World,” is full of these breathtaking bird’s-eye views. We asked Dirk to share some highlights from the new book and give us some insight into the secrets he and the other featured photographers used to create their art.

Clara Cao, Mar del Plata, Argentina
Sometimes we aren’t able to travel to some epic location to fly and shoot with our drone. This is why we should all be inspired by Clara’s image, which is an excellent example of simplicity, combined with a creative idea. What we see in this photo is that Clara spent time art-directing a creative scene using a person, perspective, and a prop. Drones afford us the ability to capture unique angles so that when you have your subject move into an unexpected position and then add in a prop like an inflatable tube, you can quickly create a visual gag that is sure to make your viewer stop and do a double take to assess the situation. Other ideas for creating a visual gag include using props like a bike or skateboard, or you can try finding a recognizable space like a basketball or tennis court to make it look like someone is hanging or sitting on one of the court’s lines.

Sterling Galli, Salt Lake City, Utah
Sterling’s stunning ice image is inspiring because we see huge winter trees in a way that is truly unique. Top-down shots are a great way to compress the depth and height of a scene which results in the landscape becoming almost abstract-like. In this photo there are still clues as to what we are looking at. First of all, there is an easily identifiable subject that not only creates a clear visual break from the overwhelming scene of white snow and trees but the kayaker is also perfectly timed and framed to be right in the middle of the landscape. Images like this show that having patience and waiting for the perfect moment can really pay off. Next, since the emphasis and contrast in the scene is focused on the kayaker, a story starts to emerge. Questions like, Where is this? Who is this? How’d they get there? and Are they alone?, all start to bubble up and make us actually engage with the image. The tiny kayaker also helps the viewer really grasp a sense of scale in this scene. Sometimes drone images can be overly abstract and/or too vague so little, identifiable clues like a kayaker, car, or person can help tell a more complete story. 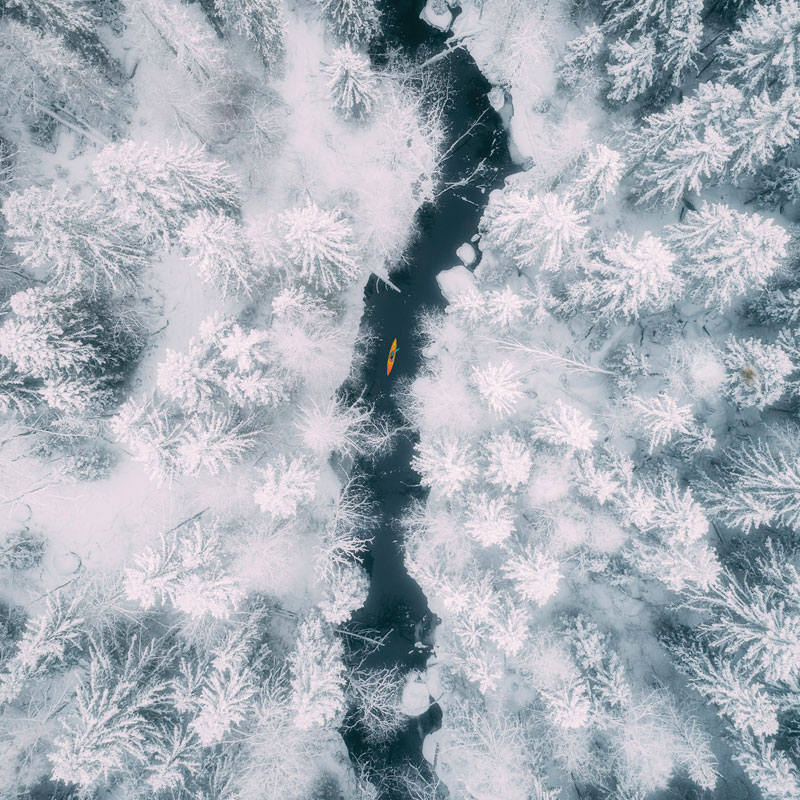 Abstract Aerial Art, Scheldt River Delta, Netherlands
This image has many things going for it but my favorite aspect is the enormous and striking shadow that dwarfs the otherwise huge cargo ship. Without the shadow in this image, the scale of this ship would be drastically reduced. Shadow play is a great tool for drone pilots to play with because it can reveal aspects of a subject or scene in ways that might otherwise be missed. Shadow play can also provide a strong contrast between light and dark areas resulting in more than a single focal point. This technique is known for helping add some mystery, drama and emotion to a photo. If you’re interested in capturing shadows, you will also want to consider the time of day that you’re shooting. In this photo the shadows are long, soft and dramatic because it was shot either in the early or later part of the day. Shadows can be equally impressive during mid-day, depending on what you are shooting, because they are shorter, sharper, and crisper. So think about what effect you are after before taking your drone up to capture some shadows. 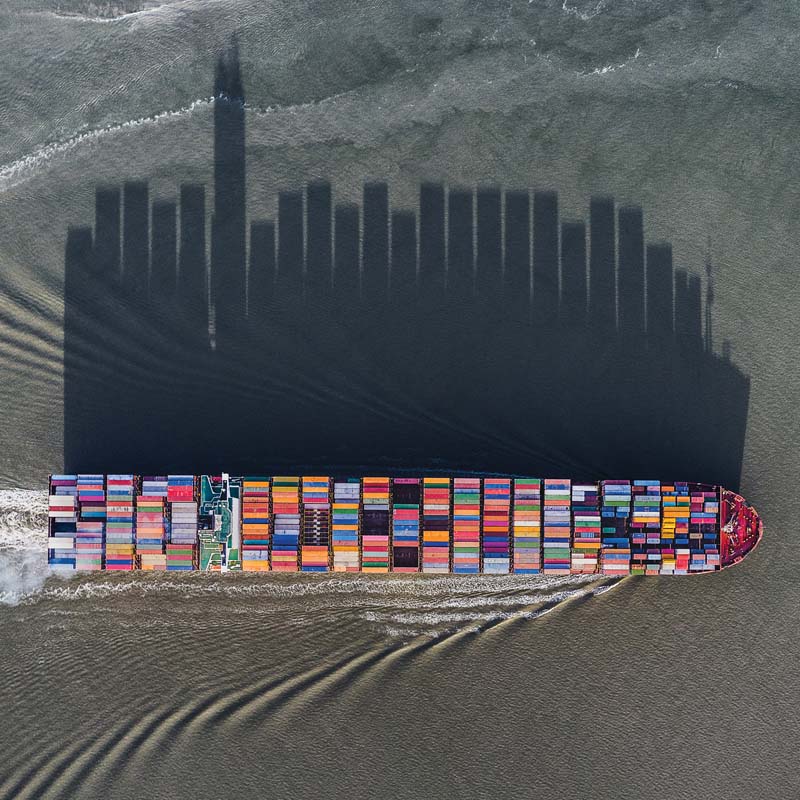 Charley Fitzwilliam, Indian Wells, California
This is a striking photo because of the mirror-like symmetry and repeating pattern that is showcased. In photography, symmetry and patterns are known to draw the eye in and oftentimes results in a beautiful, visual balance which can lead to feelings of stability and harmony in an image. When shooting symmetrical images, be sure to turn on your grid lines so you can have a visual aid when framing the shot. Also, try shooting in burst mode during the capture in case there is some wind or an accidental stick nudge that might move the drone. By shooting in burst mode you can pinpoint the precise photo that has the best framing and avoid post-production work that would require you to crop in and lose pixels. Patterns specifically can be an excellent method for creating an abstract-like image that requires the viewer to spend just a little more time than usual taking in the image to figure out exactly what they are looking at. 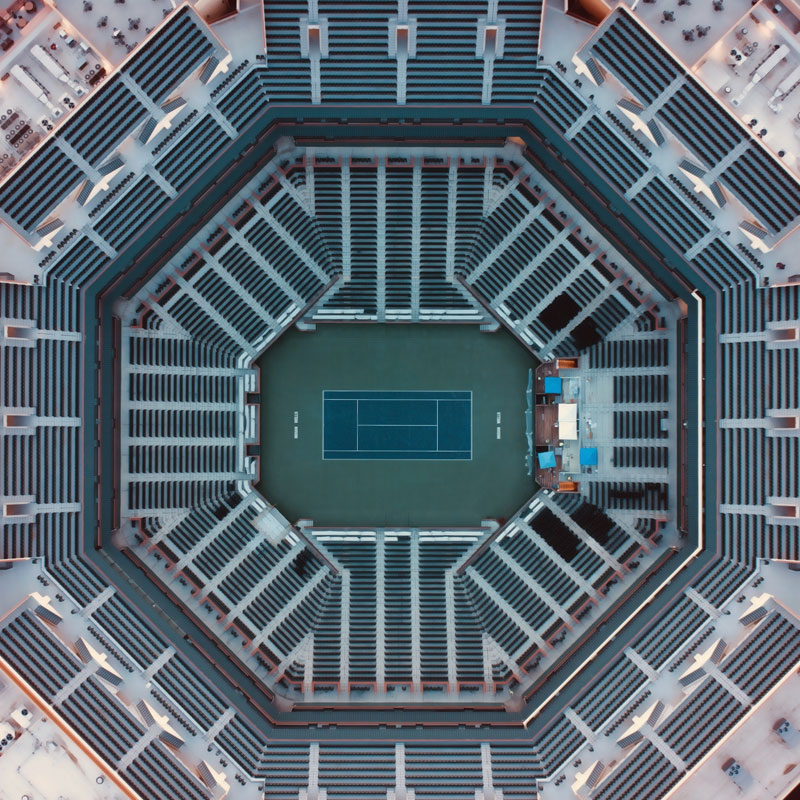 Jacob Riglin, Luoping County, China
We all know shooting with a drone is quite unique from on the ground photography for many reasons, but one of the main reasons is because we are very limited by our only light source, the sun! We can’t move it and we can’t add any light to complement its intensity. So with that being said, it is critical that we consider the sun’s light and its effect on the landscape. It isn’t enough to just capture an epic location, which is why this photo is the perfect example of waiting for the optimal moment to capture the shot. If you want to create a dramatic, dream-like effect, like we see here, then you need to be patient and plan ahead, researching when the light might be best. There are many helpful websites and apps that track the sun’s movement throughout the day but the main thing to consider is that light from the early rising or late setting sun will radically change the landscape in a fleeting moment. So be ready with a full battery and the best locations and angles already mapped out. Consider waking up for sunrise while most of the world is still sleeping. This will provide you with a better opportunity to capture a scene with minimal distractions and the early morning atmosphere will often provide you with a better chance of getting some fog or hazy effects which results in a soft and glowing atmosphere. 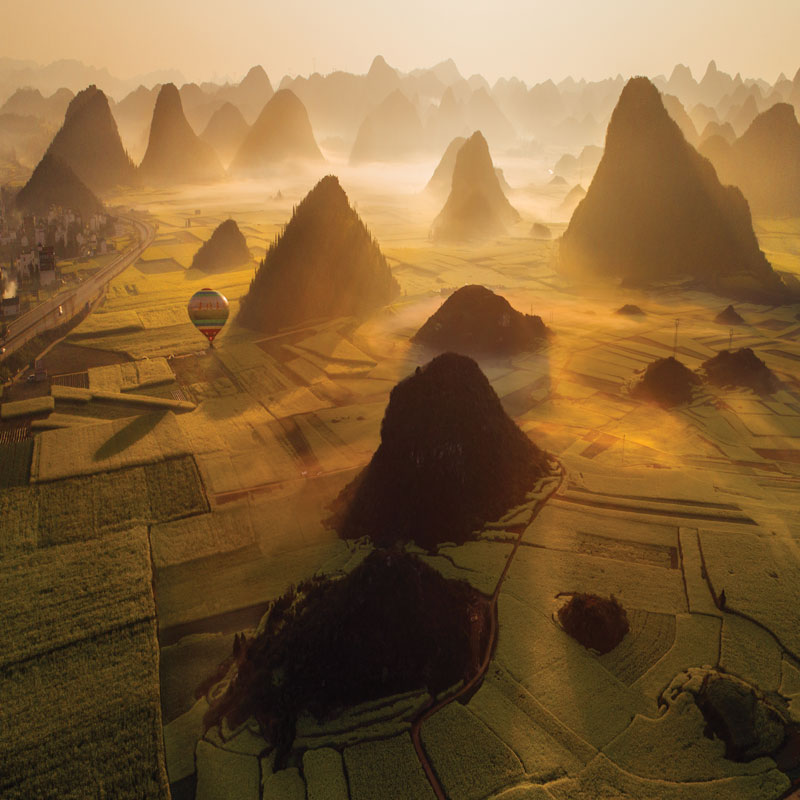 Eyes Over the World

A vertiginous overhead view of a Tokyo city street grid, set aglow with nighttime lights. Aerial shots of whales in the turquoise-blue waters of the Indian Ocean. Sunbathers languidly lounging on a tropical beach’s pearly-white sand. These are just a few of the inspiring images showcased in this stunning compilation of the world’s best drone photography. One of this era’s fastest-growing technologies, drones have transformed the world of photography, allowing a new class of creatives to capture images that shift our point of view and redefine how we see the world.

Paying homage to the breathtaking beauty of our planet, Eyes over the World features an eclectic range of natural wonders and manmade oddities captured by both luminaries and amateurs alike in the burgeoning drone-photography community. Edited by drone-photography expert and the creator of the “From Where I Drone” Instagram account Dirk Dallas, this fantastic, fearless volume offers a new sense of perspective and awe gained by this fascinating new technology. Organized geographically, it can also be used as a bucket list of sorts–a catalog of all the wonders the Earth has to offer.

The 208-page hardcover book features a collection of 20 of Dirk’s own drone photos and over 170 absolutely stunning #fromwhereidrone images from 125+ friends/photographers that were taken on all seven continents!

The images are organized geographically into five distinct landscapes: water, arid, lush, urban, and ice. This inspiring book will be the perfect addition to add to your photography book collection, keep on your coffee table or to use as a bucket list of places to explore. It costs $29.99. 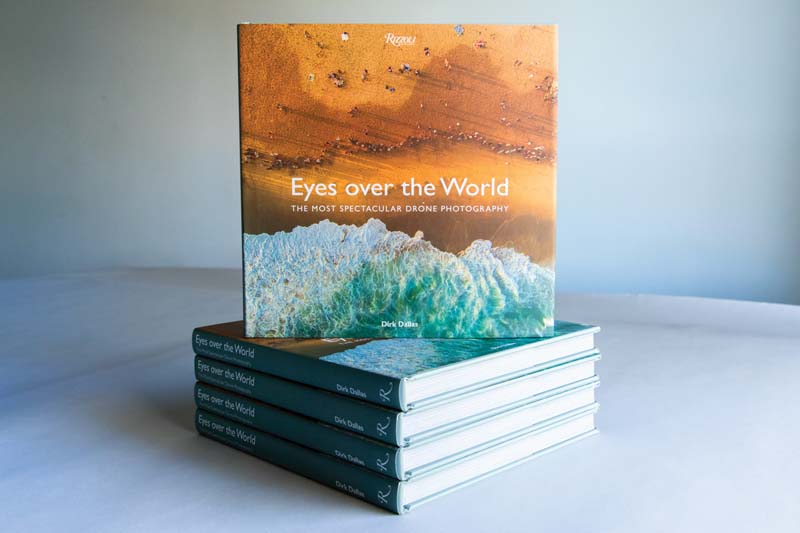 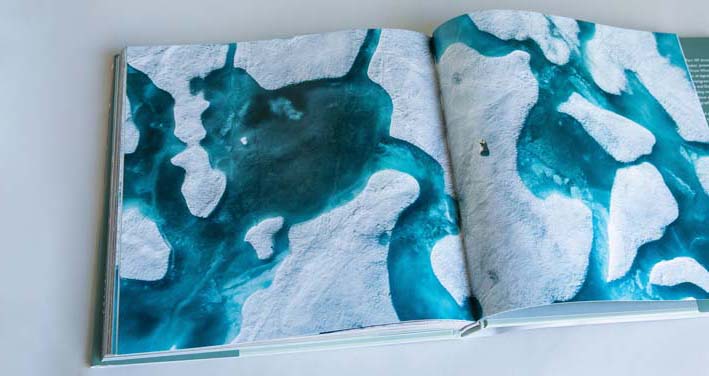 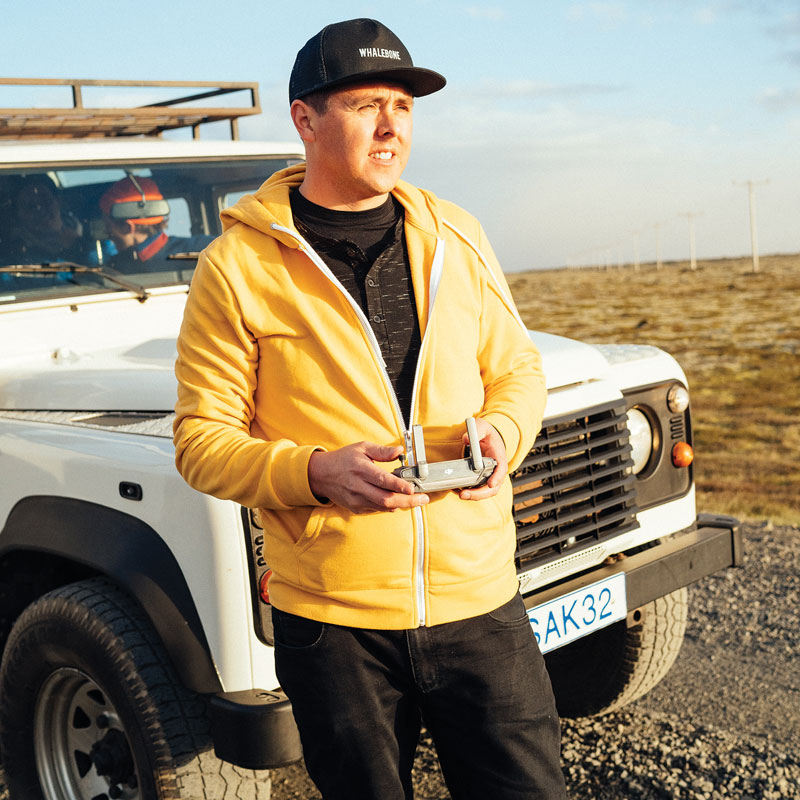 Drones In Construction: Inside the Approval of a Waiver for Flight Over Humans with…

How to Quickly Generate High-Quality Orthomosaics