The TechOne wing comes from Motion RC complete with all the flight electronics, so to get it air worthy, you just need to add your own radio system (that is capable of elevon mixing) and a 3-4S LiPo battery for LOS flight. To get the full FPV experience, toss your own camera and vTX into the nose of the beast and you’re ready to rip from the pilot’s seat.

Since FPV wings have come onto the scene, I have been a full blown junky. First, I don’t have the dexterity to keep up with the youngsters when flying drones. Second, I love to go fast and a high-powered wing is all about speed. Third, the TechOne wing is only 139 bucks with all of the flight electronics! So, I was sold on this model before I even had it in my hands, but I also had my reservations as it is not sheeted (duh, it’s only $139) and the early reviews seemed to have folks bashing it as it tended to “tuck” at high speeds and otherwise waiver do to flex. After flying it many times, I can honestly say that it is worth every penny and it doesn’t stray from where you point it all that much.

– Super inexpensive for an FPV wing

– All flight electronics included (minus radio system and battery) 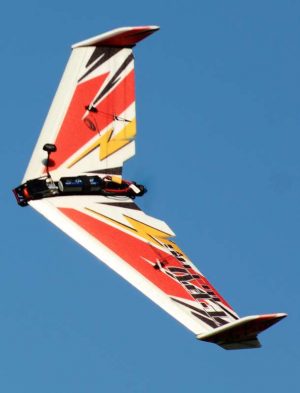 TechOne does not supply a printed manual with each model as they have gone “green” and they can be downloaded and printed or saved straight from Motion RC’s website. Said instructions are brief, to say the least, but this is a flying wing so there isn’t much to it.

The first step of the assembly process is to glue the wooden ply servo mounts in place, which I ignored (see Pro Tip #1). Gluing the factory supplied servos directly into the foam created a much better pushrod angle for each elevon, so that’s why I did it. To finish off the servo installation, simply center each servo with your radio system of choice and lock down the rod retainers (see Pro Tip #2). I had to cut about ½ inch off the end of each rod to keep them from stabbing into the elevons at full up elevator … after they were installed and locked down.

From there, it’s on to installing your receiver and taping down the ESC, which is factory installed and plugged in. There is a carbon tube that the motor is mounted too, so you only have one option to keep the motor wires from chafing on the tube, which is face down. I placed my Graupner GL-12 recevier as far forward as possible, but well clear of the neo-mags in the fuse and routed the antenna back down towards the aft of the fuse for the best reception, after installing the servo extensions.

After your servos are installed, it’s as easy as installing the wing spars and sliding the wings into place. At first (when following the manual, I was a bit confused as to why there was no mention of glue or tape to keep the wing halves secured to the carbon center fuse. Much to my surprise (and … DUH!), the wings are held in place using neo-mags and they are more than strong enough to keep them where they need to be at high speed. Once that’s done (which should take well less than 30 minutes using CA and accelerator), you’re ready for LOS flight.

To top of my TechOne wing, I used a combo from AKK. I used their CA20 cam and 600mW vTX combo as it’s a mighty fine bargain and produces excellent images on the screen. The CA20 cam comes with a swivel mount and there are two different mounting locations to lock it down. I opted for the forward position to keep the front/center cross member out of view and placed the vTX just forward of the battery. In hindsight and from my first crash forward, the vTX has been mounted on the right wing half, just outside of the fuse.

Maiden flights with flying wings have always given me mud pain (as in, my stomach is so balled up I want to blow mud in my pants), but the TechOne wing is about as easy as they get when it comes to launches. As a matter of fact, it’s even easier to launch than my Theory Type W with the SAFE system. Crank the throttle up to anywhere from 50-75% and give it a gentle toss outward with a slight up-line and you’ll be golden.

Once in the air, the wing is docile, yet agile at all but the slowest speeds. I took it up high to get a feel for it LOS and was pleasantly surprised. I had read early reviews claiming that the model would “tuck” or dive during high speed passes, but found this not to be the case. The wing does flutter a bit when maxxing out the throttle, but it’s not abrupt or absurd, simply keep on the sticks and you can keep it in check. I think the 4 degree down thrust on the motor plays a big part in the “problems” folks were having with it early on, but if you balance the model properly (for which there are locations right on the bottom of each wing half), you’ll be right as rain … as they say.

The wing itself is fully symmetrical, so it will fly inverted with no issues whatsoever. Additionally, the large elevon surfaces provide for excellent authority, giving the wing awesome roll rate and super tight inside and outside loops. Vertical performance is astounding and you can speck the model out in a heartbeat. The F80 motor combined with the 3-blade 5×5 prop not only generates an incredible sound, but it pushes the wing toward the century mark with a quickness. Even if you’re not into FPV, the TechOne wing is a great machine for flying LOS.

Slowing the model down for a stall, the controls will get mushy really quick and it’ll drop to one tip or the other, but a quick burst of throttle will straighten it up and get it motivated in the blink of an eye. Landing is about as easy as launching the wing, but just be wary that it carries speed very well and will float for days off power, so just be sure to make a few approaches before finally letting it settle in. I chose a nice big patch of long grass for my first landing, but after that, I was spot landing right in front of my feet.

When it comes to durability, EPP is the way to go and the TechOne wing is no different. On one occasion, I was actually attempting to fly underneath my GMC Sierra 4×4, but chickened out at the last minute … which saw the wing smack bottom side first onto the rear quarter panel and plant itself square in the bed of the truck. Much to my amazement, the model suffered zero damage and I was able to toss it back into the air. After a dozen flights or so, one of the control rods came loose from the retainer on the elevon horn, which had me crash nose first at a fairly high rate of speed into the grass (like I said, thread lock is mandatory). The battery did slide forward and ripped the wire harness clean off the vTX, but the model itself was unscathed. The carbon center fuse and alloy cross member absorbed the brunt of the blow, so unless you plant it nose first into a brick wall, you should be fine even if you plant it lawn jart style.

I must say that I’m more than just a little impressed with the TechOne wing. It’s tough as nails, easy to build and fly, it’s stupid fast right out of the box and it checks out at a fraction of the cost of most other FPV specific flying wings. Could it be better with a fully sheeted wing? Of course, but that would also drive the cost up considerably. As it is right out of the box, the model is an excellent choice for a first FPV wing or just as an LOS model for speed junkies. If you wanna go fast for not a lot of cash, check it out over at Motion RC … you’ll be glad you did and your wallet won’t be hurting at all.

CSI From Above: Drone Mapping vs. terrestrial laser scanners

Video of the Week! Monument Valley!